The position of the IPCC on the cloud radiative effect (CRE, also frequently named cloud forcing CF) is simple and straight forward:

Accordingly clouds contribute a large share to the albedo of 0.3, but they also have a significant share in the GHE. This brings up a profound and obvious logical problem. If there were no clouds, the albedo would be a lot smaller and Earth would absorb a lot more solar radiation. Counterfactually assuming there was no atmosphere, the energy budget would increase by 50W/m2 from ~240 to 290W/m2, which is enough to heat even a perfect emitter to 267.4K, and shrink the GHE to just over 20K.

This logic has resonated with some people at least, for instance Prof. Richard Lindzen23. Of course such timid application of logic is not well received in "climate science" and will be ignored at best. It does not matter anyhow, since the thought has not been thought to the end. If we want to know what the surface temperature of Earth would be without an atmosphere, we do not even have to consider the atmosphere.

This is something so obvious, simple and logical, that will never come a "climate scientist" into mind. Indeed we need to know nothing about the atmosphere itself to assess the GHE. An absent atmosphere will not have any impact and it all comes down to the properties of the surface itself. If we know absorptivity and emissivity of the surface, we can calculate the temperature it would take on with given insolation. As far as the observed surface temperature is higher, we will have to blame that difference on the atmosphere. That, if you will, is the short cut in determining the magnitude of the GHE, and we will explore it.

However I am mainly going to take the long road because there are amazing (in-)sights on the way, which not only help understanding the true nature of the GHE, but will also show what tricks and exaggerations are being used to propagate the common narrative. This common narrative can be summed up by the simplistic illustration of the emission side. 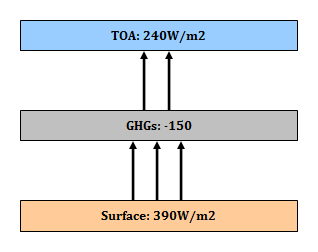 The surface emits 390W/m2, GHGs reduce that figure by 150W/m2 and on top of the atmosphere (TOA) we are left with only 240W/m2. We could discuss the exact numbers here, but we are going to have a much deeper look on them anyhow, so it is not worth it for the moment. The important part is, the 240W/m2 of outgoing radiation balances the energy added by the sun and as long as albedo or insolation do not change, this figure is given. There could only be minor, temporary variations if the Earth should cool down, or warm up.

Yet we have not allowed for the above statement by the IPCC. If clouds contribute a 30W/m2 to the GHE we need to sort out this part. Actually the LWCRE is defined as difference between average emissions and clear sky emissions4. Also that is very important detail we are going to deal with. Anyhow with clear skies, average emissions are about 270W/m2. 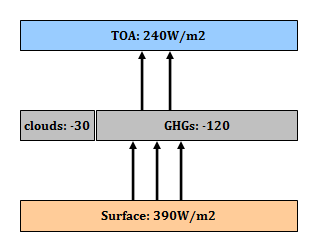 So we necessarily come to conclude GHGs are reducing emissions only by 120W/m2, not 150. It may seem like a technicality, meticulous reasoning on what is obvious anyhow. But then, if it is so obvious, why is it constantly forgotten? Just because it impairs a certain narrative? A 20% reduction of the GHE (due to GHGs) is not nothing, and we are only getting started..