As we have discussed GHGs and clouds are overlapped all over the place. “Climate science” largely ignores this and the logical implications to it. Moreover however, GHGs overlap themselves so to say. It is for this reason, that a doubling of CO2 will not double its radiative forcing, but will only cause a gradual increase. Some people call this “saturation”, suggesting CO2 and other GHGs would hardly enhance the GHE with additional quantities. While this is essentially true, there is no innovation in it, as the orthodoxy claims nothing else.

For instance modtran suggests some 33W/m2 of gross, or “single factor addition” GHE of CO2 at 280ppm. This figure is a little too high, as we have discussed previously, because the model overstates surface emissivity. Anyway, doubling CO2 would then only increase this GHE by the well known 3.7W/m2 to 36.7W/m2. As the second batch of 280ppm naturally have the properties as the first batch, it will equally produce 33W/m2 of GHE in this instance. But 89% of it are overlapped with the first batch, and thus will not make a difference in the end. Only the remaining 11% produce a net gain. And of course these figures will shrink by a significant margin, once overlaps with other GHGs and clouds are considered.

The same thing that goes for emissions TOA, is also true for “back radiation” (BR). BR can naturally never exceed the emissions of black body of the same temperature as the atmosphere. As the atmosphere is a grey body with an atmospheric window, it well necessarily emit somewhat less radiation downward. And if there are multiple layers so to say emitting BR, these emissions will not add up and accumulate, but rather are going get absorbed by the atmosphere itself. In other words, there is much more BR then we can measure at the surface, but most of it is re-absorbed within the atmosphere, and never reaches the surface. The question is, how much is there?

Now if we reduce CO2 to only 0.4ppm, only a thousandth of the previous concentration, we are still left with 8.657W/m2 of BR. Again we subtract the N2O contribution which leaves us with 6.999W/m2, which I will always do from now on, without further mentioning it. So while the CO2 concentration dropped by a factor of 1000, BR fell not even by a factor of 10. The graph below shows BR at 400 and 0.4ppm. The little peak to the left is N2O btw. 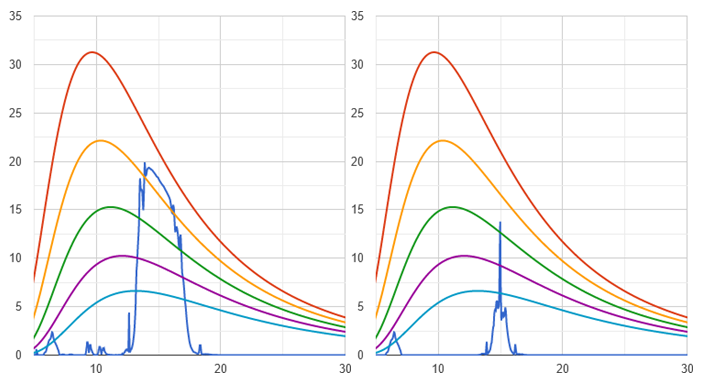 The next thing is a simple logical consideration. A 400ppm of CO2 consists out of 1000 parcels of 0.4ppm. If such a single parcel emits said 6.999W/m2, the other 999 parcels will do so as well. In fact every molecule of CO2 will emit the same radiation (at the same temperature), as the SB law tells us. So there should be 6.999 * 1000 = 6,999W/m2 in total BR, of which only a tiny share ever reaches the surface, while the bulk of it will simply get absorbed by other parcels of CO2. From this alone we can already guess there must be huge amounts of BR within the atmosphere.

The problem is that a parcel size of 0.4ppm is an arbitrary choice. Most likely, even with such a low concentration, there will be re-absorption occurring. Ideally we should choose the smallest parcel size possible to minimize this factor, but this might get us in conflict with the limited resolution of modtran. There is a chance we might run into random numbers.

The other problem is that most BR measured at the surface comes from the lowest atmospheric layers, where it is relatively warm. Higher up the temperatures are lower so that CO2 molecules there will emit less radiation.

Thankfully both problems can be dealt with by minimizing CO2 concentration in the model. The less concentration, the less re-absorption will occur, and the higher up the average emission altitude of BR will be. With the first problem being dominant, we should see ever higher amounts of BR the smaller the modelled CO2 concentration. On top of that, if the model is accurate enough, the results should converge towards a certain magnitude, as we use ever smaller concentrations. 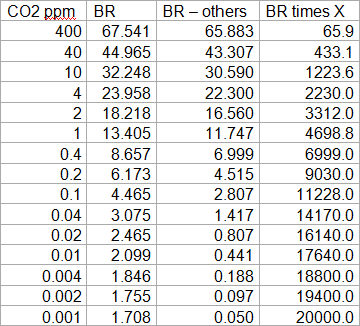 Following this procedure towards ever smaller parcel sizes, thereby minimizing inner-parcel re-absorption, and then multiplying the BR by how many parcels fit into the 400ppm base scenario, we get a result that makes sense. These are not crazy, contradicting numbers, but rather we see a very smooth convergence towards about 20.000W/m2. Using even smaller concentrations than 0.001ppm will not produce any reasonable result, but since the convergence has been well established at this point, there is no need to go any further.

So CO2 alone produces about 20.000W/m2 in BR, of which almost the entirety is again re-absorbed by CO2 itself. I guess this is a pretty impressive figure. In some ranges of the spectrum CO2 is so optically thick, that photons would only travel for a couple of centimetres before they get re-absorbed.

Of course we have other GHGs and clouds. I will not try to annoy you by applying the same or a similar procedure on them. But it seems obvious that at least WV and clouds should be even more potent emitters and absorbers of radiation. For the sake of argument let us guess there was a total of at least 50.000W/m2 in BR throughout the atmosphere, with almost the entirety getting emitted and re-absorbed there, and only a tiny fraction of about 300W/m2 radiated directly onto the surface. Then what are the implications?

First of all we would need to know if it makes a difference, whether BR is absorbed within the atmosphere or at the surface. For those who believe in a BR caused GHE it is a delicate question. Is only the BR absorbed at the surface relevant? If so, why? What about the plenty of BR re-absorbed by the atmosphere very close to the surface? If all BR caused a GHE, with some 50,000W/m2 of it, should we not be toast?

But there is more. What if we recall those typical Earth energy budgets? Why do these only show the BR radiated onto the surface, and not the abundance of BR throughout the atmosphere? Is it because this would make the diagram incredible complicated, or because it might jeopardize the argument it tries to make? Is it not interesting how “climate science” constantly forgets what does not fit the narrative, while exaggerating everything that does?

There are a lot of people who rightfully deny a “back radiation” driven GHE. Regrettably the arguments brought forward are a) “back radiation” would not exist, b) pyrgeometers were unreliable instruments (which they may be), or c) the second law of thermodynamics. They are all pointless, as “back radiation” of course does exist, although radiation does not care about a direction. Also the argument c) is pointless, as the colder atmosphere, or a positive lapse rate respectively, is indeed what is causing the GHE. In this sense, cold “heats” warm by insulation. But it is not about a flow of energy.

Anyway, the actual problem with “back radiation” is not its inexistence, but its abundance. It is everywhere, it is ubiquitous, and there is plenty of it. If it did anything, climate wise, we would all be doomed! Not some decades into the future, but now, or long ago, whatever.

This brings up an interesting perspective on the multi-layer GH model as presented by Manabe, Strickler 19642 and others34  . Per se the idea of splitting the atmosphere in opaque layers seems a bit odd, since partially the atmosphere is perfectly transparent (within the atmospheric window), or extremely optically thick, like at 15µm due to CO2. However, since it is all about BR serving as a heat engine anyway, arithmetic averaging of optically thick and thin parts should be fine.

The model assumes only like 3 atmospheric layers providing moderate amounts of total atmospheric BR, far less than there actually is. Yet it produces a GHE far larger than we observe. Manabe, Strickler name 332.3K for a “pure radiative equilibrium”, so that the GHE was actually 77K (332 – 255). They also explain why thank god Earth is not that hot, as convection would counter this massive GHE. Accordingly the lapse rate would then be a compromise between the radiative GHE and mitigating convection.

Ironically the lapse rate is actually a function of the ideal gas law instead, something the model implicitly denies. Moreover the assumed 3 layers are just a totally unsubstantiated guess to support the model, which hugely overstates the GHE nonetheless. Had they ever looked up the properties of the atmosphere and how much BR there actually is, their model would have gone haywire, producing a GHE of well over 500K. It would have been obvious the model does not work.

However, as such a reality check was never done, the model is still alive and taught in schools. And Mr. Manabe was even awarded with the Nobel Prize..

PS. As before I fully acknowledge the IPCC has dropped “back radiation” from its definition of the GHE with AR5 eventually. I am confident it will not re-emerge with AR6, although the final WG1 report has not been published yet.